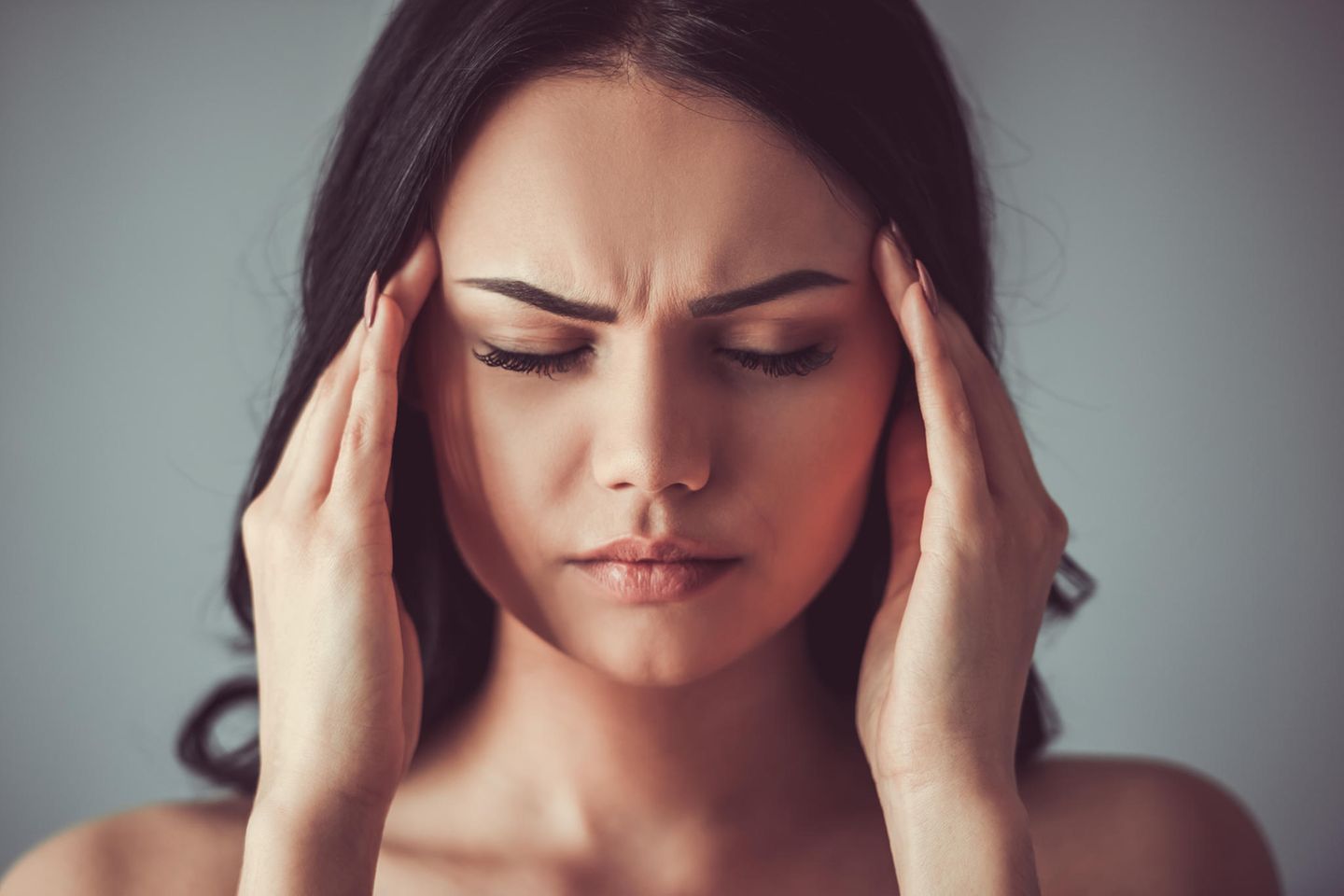 There are 243 types of headaches, many are harmless, but unfortunately not all. If the pain attacks accumulate, something urgently needs to be done about it.

Headache: When the skull is about to burst

There is throbbing and throbbing behind the temples, the whole head hurts as if it were about to burst, and no sensible thought is possible anymore. Headaches are one of the most common everyday complaints. Two out of three adults suffer from it - at least occasionally - women more often than men: Welcome to the "headache society."
The headache attack usually passes quickly, and it can often be relieved by simple means or by reaching into the medicine cabinet. But that doesn't always work. For many, the torments recur at intervals, and it is not uncommon for the pain to rage almost continuously and permanently, turning into a chronic headache in which normal life is hardly possible.
The clear-sounding term is misleading: not all headaches are the same. Strength, duration, character, and, above all, a cause can vary widely. They can therefore only be treated successfully if it is possible to find out what is behind the pain.

There are a total of 243 types of headache disorders

The World Health Organization (WHO) distinguishes between 243 types of headaches on its internationally valid list. If it was a little too much red wine the night before, then we grapple with number 134, preferably drink a lot of water and lie down on the sofa with a cold compress if possible. Even with inflamed sinuses, the skull is booming, headache number 204, but the cause is obvious and you know that the pain will be over in a few days.
Headaches are rarely a warning sign of a life-threatening illness. The likelihood of having a brain tumor behind it, headache number 116, is only three in 100,000.
If alcohol or another illness is to blame for the throbbing and booming in the skull, doctors speak of " secondary " headaches. They usually go away when the red wine has broken down in the body, a cold subsided or the underlying disease has been treated.

Headaches often occur for no apparent cause

Research has shown that a good 90 percent of all attacks are not triggered by injuries or other illnesses. Here the pain is not a reaction to anything, but the actual illness itself. And the cause of these " primary " headaches is difficult to track down deep in our nervous system.
The most common form of these symptoms is tension headaches . 13 different variants are on the WHO list under numbers 24 to 36. According to surveys, they plague almost every one of us at least once a year, and more than two million Germans even daily. With a dull squeeze like a vice, they wrap around the skull on both sides. But unlike migraines, they are not associated with nausea and can improve with exercise.
In the past - hence the name - tension in the neck and neck muscles was thought to be the cause, today researchers know that the brain itself is the cause of this pain: Certain filters in the brain stem that regulate which and how much pain information reaches our consciousness, no longer function properly with this type of headache. Even normal signals from muscles and joints are perceived as painful.

Over time, the pain eats its way deeper and deeper into the brain

And the longer the pain perception is disturbed, the more it changes the brain itself. The pain leaves its mark on the brain cells. A " pain memory " arises in the brain, which is normally completely numb and does not know any pain itself. And in the worst case, the pain becomes independent, so it can be felt even without prior stimuli or solely because the person concerned thinks of something that could trigger their suffering.
The Hamburg neurologist private lecturer Arne May was able to prove that even gray matter is lost in the pain centers of people with chronic tension headaches. Over time, the pain eats its way deeper into the brain, its traces are more and more difficult to erase. "If a headache persists for more than five years, those affected can hardly become completely pain-free again," says Professor Hans-Christoph Diener, Director of the University Clinic for Neurology in Essen.
Also migraine , number 1 of the WHO list, and second most common form of "primary" headaches, produces the brain itself In affected patients, it is probably due to an inherited predisposition, overactive and it may flood in certain situations with nerve messengers.. This causes the blood vessels in the cerebral cortex to expand and inflame. At the same time, the sensitivity of the nerve sensors in the brain stem increases. The result: the typical pulsating, throbbing pain that gets more violent with every movement and is accompanied by nausea and even vomiting.
The cascade of reactions is usually triggered by a combination of various factors, hormones, especially fluctuations in the estrogen level, also play a role. Because of this, more women than men suffer from migraines, at least until the hormone levels stabilize again during the menopause.
Another major trigger is stress. "The brain of a migraine patient does not get used to it, but becomes increasingly sensitive," explains headache specialist Arne May. In addition, migraine sufferers are often very conscientious, do not forgive themselves or others, and do not notice that they are overwhelmed by it. Only the migraine attack forces them to rest and take care of themselves. If those affected learn to deal with stress differently through behavioral therapy and relaxation techniques, this can alleviate their migraines.

Other possible therapies for persistent headaches

Elaborate special examinations are usually not necessary for headaches. It is much more important to closely monitor the pain and its accompanying circumstances. A headache diary can be helpful. Because when it hurts, where and how, is decisive for the exact diagnosis, for the assignment to one of the 243 numbers and ultimately also for the therapy. The more the doctor knows, the better and more specifically he can treat. An example: In migraines, drugs with a triptan active ingredient do not combat the pain, but directly combat the cause, the inflammation of the cerebral vessels.
Medical professionals from San Francisco also reported sensational success with another small electro stimulator. It is not implanted in the brain, but in the neck, near a certain nerve. This reduced the pain by 80 to 90 percent. "These therapies can only be the very last resort," says Arne May. Such interventions are associated with considerable risks and do not help everyone. However, most patients can be treated very well with conventional methods.
Even so, many people still deal with headaches with themselves. Over half of those with tension headaches have never seen a doctor with their condition. Many women with migraines are also of the opinion that no one can help them, that they have to endure their illness.

If in doubt, always see a doctor!

It is fatal not to treat recurring pain adequately and only on your own. All too easily they can become chronic. The limit is 180 days a year. Or if pain occurs for more than 15 days per month for at least six months. Then deep traces are already buried in the brain and the treatment is more protracted and more difficult. It is, therefore, better not to wait so long to see the doctor. Tumors, bleeding or other life-threatening diseases are rarely the cause of headaches. A doctor should be consulted immediately if the following warning signals occur:

If the disease is not discovered quickly enough, permanent damage is possible. For example, patients can go blind if the vessels that supply the optic nerve are affected, warns Wolfgang Schmidt, senior physician at the Rheuma-Klinik Berlin-Buch. Rapid treatment with cortisone can prevent this. The pain is gone too. "In more than 85 percent of the patients, the arthritis is diagnosed with ultrasound," says Schmidt, who developed the diagnostic method.

Headache medication can be addictive

Frequent pill consumption can be addictive and in turn trigger headaches. Approximately two percent of the population suffer from such a drug headache. The only remedy for this is withdrawal, which can drag on for two to three months. "In doing so, we also convey to those affected that the withdrawal is not our performance, but must be their own," says Arne May.
To no longer be helplessly at the mercy of pain, to be able to control it again - that is one of the most important steps in the fight against the inferno in the head. The fact that pain arises in the brain also means that its perception can be influenced by our behavior, thoughts and feelings. So headaches don't have to be fate. But if you hesitate too long to seek help from experts and endure it with clenched teeth, you will miss the chance of a cure.