Do you also suffer from a duvet lung? 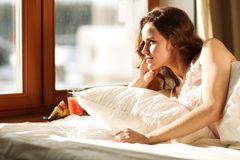 A Scot came to the hospital with shortness of breath and long puzzled the doctors. Until they found the cause of the discomfort in the man's bed.
A cause - and thus a possible treatment - cannot be found quickly for every condition. A 43-year-old Scotsman had to find out how long the search for possible triggers can drag on: The non-smoker had been suffering from shortness of breath for months, was constantly tired, and generally did not feel well. The doctors first suspected that the respiratory tract was inflamed, and the patient was better off in the short term thanks to appropriate treatment. But then the condition of the Scots suddenly deteriorated again, he had to be on sick leave for two weeks.

The riddle was in bed

The blood picture, chest X-rays and examinations of the kidneys and liver of the man remained unremarkable, as the doctors reported in the specialist magazine " BMJ Case Reports ". Finally, a doctor asked the patient more closely about their living and living conditions - and found the solution to the riddle in their bed. The Scotsman had bought a new duvet and down pillow the year before - and his symptoms came from a rare lung disorder called hypersensitivity pneumonitis.

A rare case of a "feather bed lung"

Due to the disease, the patient is allergic to spores from mold and bacteria. In this particular case, dust from the goose or duck feathers in the patient's bedding triggered the symptoms. The doctors in this case, therefore, called the lung disease "feather duvet lung", in which the alveoli became inflamed. It is rare that the down filling of the bedding triggers such severe allergic reactions, but the doctors warn against taking the disease lightly: at worst, it can lead to incurable scarring of the lung tissue, so-called pulmonary fibrosis.
Dr. Owen Dempsey, who treated the Scots with, told the Guardian: "I believe there are many more cases that we doctors are not aware of and because we are not aware of them, they are ignored." It is therefore important that in the future, medical professionals should not only ask for possible pets in the event of respiratory complaints but also about the contents of the bedding.

And the Scotsman? He felt better quickly after banning the feather filling from his bedding. After a month, the symptoms had largely subsided without him taking any medication. After half a year he was completely healthy again.